No Training?! (and injury update)

I am not training for anything right now.  What can I possible be thinking?  Okay, so maybe that racing costs money (including paying for staff to work in my stead) and I was injured and I am just tired.
But really, it is my weight.  Back in '08, I lost 60 pounds.  I kept it off until last fall, but since then I have put on 15 pounds.  I stepped on the scale last Saturday morning and it clicked.  I had to do something and I had to do it now!  Not tomorrow, NOW!  I started back on my strict diet.  It is well balanced, moderate carbohydrate and very low calorie.  I love it!  It totally works for me.  However, this diet and "training" do not mix well.  Running fine, just not hard workouts or lots of miles.
For now that works for me.  I can live with running for the love of running.  Besides, running back at my goal weight is so much easier on my body and my spirit.  Just by starting that journey back, I feel better about myself.  Some say that finishing a marathon is a life changing event.  For me, it was waking up on my 41st birthday and being back at the weight I was when I got married at 19.  It proved to me that I could do what I set out to do.  The marathon just reminded me of that fact.
P.S.  Ankle update.  I did see the sport's chiropractor at Back in Motion.  I love that I go in and he is wearing his shirt from the Olympic trials.  (Many of the professionals in this office worked in Eugene including my massage therapist.)  It gives me confidence that he knows what he is talking about.  It seems I had a residual injury due to a high ankle sprain the previous year.  After massage, ART, Graston and taping, I am back to running without pain.  Today's 4 miles were untaped and pain free!  Thanks for all the advice!  You all ROCK!
P.P.S.  My sister read all your responses and now calls herself a runner!  She ran in the rain yesterday and thought it was awesome.  That certainly makes her a Runner with a capital R!!
Posted by juanitagf at 4:26 PM 4 comments:

When is a runner a runner?

My sister started running recently and has worked up to 3 x 9 minutes of running and 2 minutes walking.  I am so proud of her!  And tagged her in a Facebook post this morning saying just that.
She responded with the following:
Thank you so much! So when can I call myself a runner? I was thinking when I can run 30 minutes straight. Do you remember that when you started I told you I didn't ever think I would be a runner?? Who knew it could be so much fun.
My response:
It is fun!  I believe you can call yourself a runner now!  3 x 9/2 is a great accomplishment!  I think it finally hit home that I was running down at your place (Summer '08).  The day I went out and ran 20 minutes without stopping was a huge accomplishment.  When I saw that on the schedule, I really wondered if I could do it.  I felt like a super hero when I finished!

What do you think?
When can my sister call herself a runner?
Posted by juanitagf at 3:29 PM 3 comments:

1.  I get to run.  I have the strength and health to be able to get out there.  P.S.  The strength training is really making running hills easier.

2.  I don't have a headache.  I have had one for several days and last night it turned into a nasty migraine.  Ice packs and 2 vicodin led to a great night's sleep and not even a smidge of a rebound from the narcotic!!

3.  My husband loves me.  He doesn't wait around for some so-called holiday to show me.  He shows me every day of the year.  Hallmark can just take that!

4.  My extended family.  My hubby's family is great.  I have never felt like I am an outsider looking in.  In a few minutes, I am picking the boys up from school and they are hanging out here for a while.  This is going to be exciting...

5.  My new resident is doing great!  He seems comfortable and transitioning quickly!  Ahhh!!
Posted by juanitagf at 2:22 PM 2 comments:

My left ankle has been stiff for a couple of weeks.  I sprained it last winter and then rolled it in November.  I took really good care of it.  RICE was key.  KT tape was on it for several days.  Everything was back to normal until the last couple of weeks when it started feeling stiff and sore.  I finally decided it was referred from my heal.  I decided it was probably plantar faciitis.  I started icing and rolling with a golf ball.  It was feeling better.  Then the weird thing happened this morning.  My weight was on it and I turned a quarter turn.  OUCH!  Quick, sharp pain.  But it was gone as quickly as it arrived.  After some stretching and icing, it was fine.  Then this evening, I put weight on it and the sudden pain was back.  And it still aches.  I have it braced at the moment.

So, what do you think?  Do I just need to take a couple of days off?  Or should I head to the doctor?
Posted by juanitagf at 8:07 PM 4 comments:

My friend, Coelle, is a member of a running club up in Vancouver.  Every Saturday, they have low key races.  Free to members and $2 for non-members.  And they don't start until 10 AM!!  This week's was at Lacamas Lake with a choice of 3 or 7 miles.  My plan was to head out plenty early and get 6 ish miles in then run the 3 as a fast finish for my long run of the week.  What could go wrong with a plan like that?
Yeah, right...  To begin, I pushed that old snooze button on the alarm waaaay too many times so I left later than planned.  And it took me longer to get to the park than I expected.  I parked and thought, "No problem.  I can still get 4 miles before it starts."  I set reached over and unlocked the car doors, set the keys on the seat and headed around to get everything ready to head out.  Uhhh, oops!  I didn't unlock the doors...  I had just locked my keys in the car.  Sigh.  Pull out the phone to call Coelle.  No service.  Well, at least, I was wearing my running shoes.  I pulled off my warm up pants and started down the trail.
My legs were heavy and sluggish.  My lungs were not happy--but my inhaler was in the car.  Sigh.  I ran out about a mile then headed back.  About a mile because my Garmin was in the car.  Sigh.  I stretched and waited for Coelle to arrive.  She had told me that at least one other Looper was planning to be there so I kept my eyes pealed for anyone familiar.  A few minutes later, I saw a woman that had to be MildSauce.  I introduced myself.  She is as sweet and funny as she appears in writing.  Shortly, Coelle, MildSauce and I were talking and Raforken joined us.  Photo op!!  Raforken headed out for her 9 miles before the race began.  MildSauce was doing the 7 and Coelle and I were running the 3.
The race was low key, but very well organized!  The start line was behind the clock.  The route headed accross a few feet of grass to an asphalt path before a hard packed trail of pea gravel.  The trail was full of rollers.  Coelle and I headed out quickly, but not too hard.  It will be interesting to see our final time and see if the pace matches my perception.  My guess is that it will not.  The whole thing felt hard.  I told Coelle that I was doing better than I sounded.  She laughed as she was wondering.  Hey, no inhaler = lots of wheezing.  Normally, we talk nonstop when we run together.  Not today.  We were working too hard.  A few words here and there were enough.  I was so happy to see the turn around!  Most of the return we were following a 10 yo boy.  I wish I had that much energy.  He would sprint up the hills then coast down.  For the most part, he stayed right in front of us.  He could have finished much faster if her weren't running from side to side and jumping off rocks along the way.  Every time I thought we might catch him, he would sprint ahead.  The distraction was nice and helped me get into a zone.  I was ready to be finished.  I tend to speed up on the return on out-and-back courses.  We rounded the corner together and the finish line was in sight.  One last push and we crossed the line together.
We headed back out to jog an easy cool down and cheered for MildSauce coming toward the finish line.  We jogged our cool down--and walked some since my left ITB tightened up.  Mild Sauce met up with us and we visited.  There is always something to discuss with other runner!  On our return to the parking lot, Corina's AAA membership was a there to unlock my car.  More talking and laughing before we headed our seperate ways.  It was a morning that could have ended poorly yet had a happy ending because of friends! 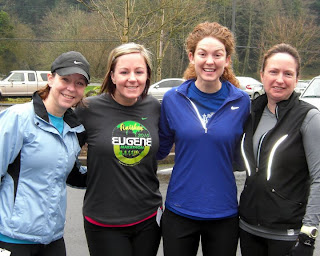 juanitagf
I am: A true believer in the saving blood of Jesus Christ and in His return for his children, Happily married 99.6% of the time, Mom of two precocious papillon-pomeranian mix puppies, A fantastic aunt of 50 nieces and nephews and 19 great-niece/nephews, The most amazing sister of six, A runner with the goal of running until the day I die, A small business owner, A rather strange and eccentric person with a great sense of humor and a tendency to take myself too seriously